It was the perfect end to the 2016–’17 Demon Energy D1NZ National Drifting Championship for Cole Armstrong, taking both the round victory and title win in emphatic style at Pukekohe Park.

After seven years of trying, he defeated fellow series long stay Daynom Templeman in the final battles, cheered on over commentary by Cole’s mother, Leanne Armstrong.

"We had a goal at the start of the year and we’ve just achieved it,” a jubilated Armstrong said following his win.

"I’m absolutely over the moon. These people standing behind me have put their heart and soul into it just as much as I have and it paid off. Seven years we’ve been waiting to get here and we’ve finally got it.

"To take out the round win too is just magical.”

The first of the top-16 battles saw Woolhouse go head-to-head with Joel Patterson. In his Nissan Skyline R32, Patterson stuck to the bumper of Woolhouse’s Commodore in their first run, but dropped a wheel off.

The crowd went wild when drama struck. Woolhouse dropped a wheel off in back-to-back corners before spinning at turn three. Patterson handed the win. 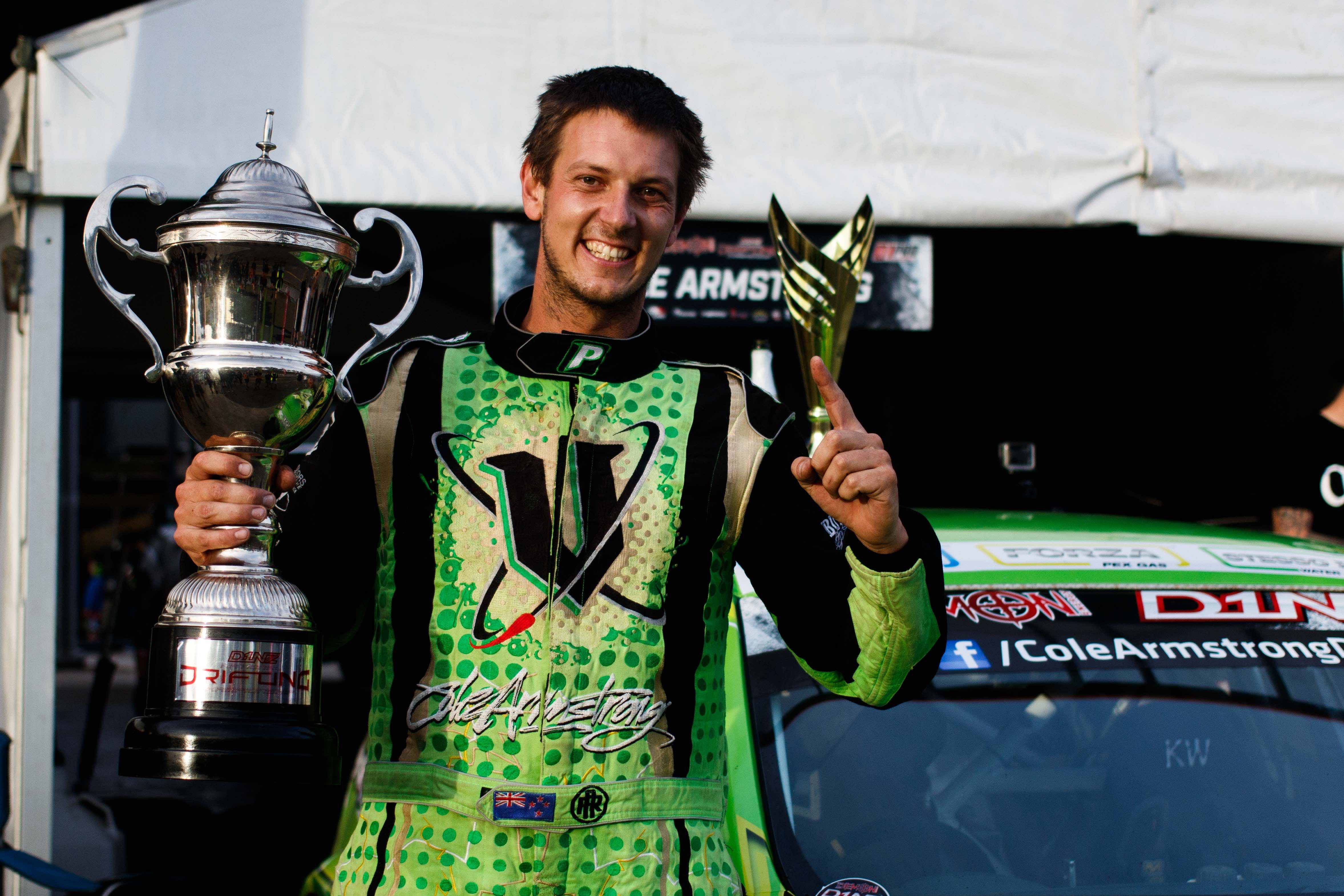 Cole Armstrong leapt out ahead of Jerry Zhu in their first top-16 run and was handed the easy run into the top-eight after Zhu straight lined the course. He then continued his charge through to the top-eight as he swept past Troy Jenkins.

Adam Davies made a colossal mistake in his top-16 battle against Troy Jenkins. The Mimico backed drifter climbed the turn two kerb after a half spin, which gave Jenkins the pass through to the top-eight. The second run saw Davies suffer a blown intercooler.

Darren Kelly led an underpowered Joe Marshall into turn one, but the Nissan Skyline GT-R powered away from Marshall. However, perhaps the greatest upset started as Kelly straight lined turn one before snapping wildly into turn two and went straight over the grass through the esses.

Joel Patterson looked to threaten Joe Marshall’s title bid as he rode the bumper of the leading Toyotaz Galore GT86, but dropped a wheel off to the inside of turn one. Marshall didn’t play it safe in the second run as he looked to hound the leading Skyline, and into the top-four.

The first top-four battle saw a hard charging Wilkinson – who’d stormed past Chad McKenzie, and Jaron Olivecrona – go up against Daynom Templeman. There was a significant gap between the two cars in their first run. Whilst Templeman was shallow at times, Wilkinson stacked on angle, but the judges determined a one-more-time.

Unfortunately for Wilkinson, his best run this season season saw the OMT go the way of Templeman.

An initially strong chase by Joe Marshall against Reid was undone on the switch when he dropped a wheel off, compounded by a straight line at turn two.

Nico Reid and Cole Armstrong fought for the final spot in the first of the top-four semi-finals—the pair were inseparable in their first run. Ultimately, Armstrong took victory after each took their respective five-minute time outs. 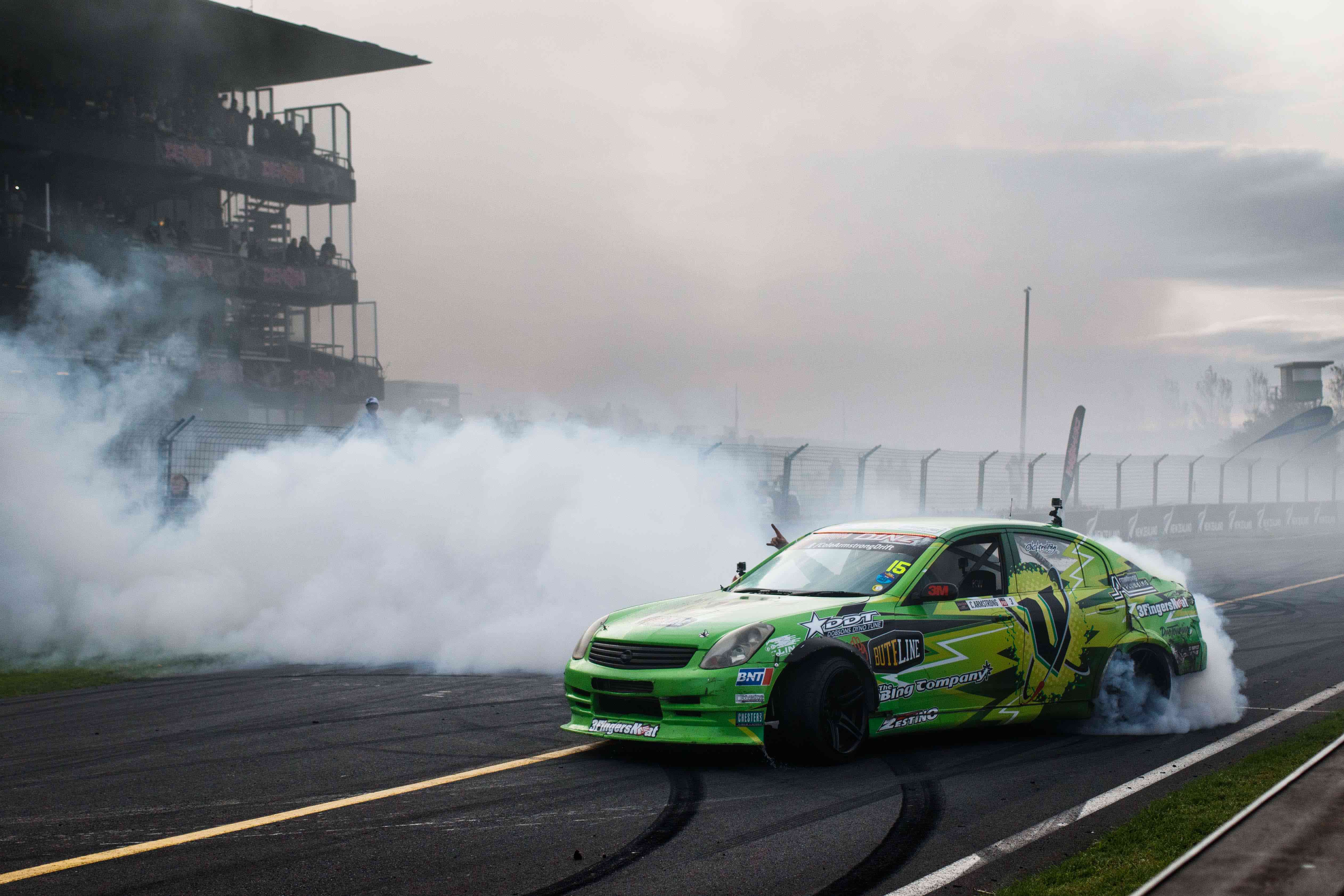 Tom Marshall and Templeman each made their fair share of mistakes in their top-four semifinal battle, but the biggest mistake came from Marshall with less than 50 metres to the finish. He straight lined and under steered into the outside wall at turn four, giving Templeman the win.

Reid looked odds on to win the battle for third until he went too hot into turn two, skating off the track into turn three, handing Marshall the third for the round.

In the final battle of the weekend Armstrong faced Templeman for outright honours. Armstrong led Templeman in the first battle and was judged to have clipped every zone.

As he chased Templeman, he struggled to see through the smoke coming from the 1000 horsepower BMW M3. However, he made it out the other side having hit all the clips the judges desired, whilst running close to the rear of his rival.